Whew. I just discovered something about the scene of The Play House you see below, and I have to share it with you!

As you may know if you're active on IG, this past summer I incorporated this scene into the latest draft of the book. Before, it was sitting somewhere in my computer, collecting dust in a folder called "Land of Lost Scenes." That's to say, I wrote it for an entirely other story back in January 2018 and then scrapped the whole project in favour of The Play House.

I had no idea it would find its way into the final draft of TPH, nor, to be honest, did I know what it really meant.

When The Play House crystallized in my mind during my stint in the UK last December, I had only surface-level figured out what I was referring to when I wrote of "The Glass House of Truth." It took a few more months to unravel. And then, just today, I came upon the following in a psychology paper, and my jaw dropped. It's too perfectly dead on in its description of Scarlet's internal struggle. And so, now, here it is, the symbolism behind the glass house:

Glass often appears in dreams. Glass is a substance which is highly isolating, embracing the soul in an efficiently protective manner, but cruelly shutting it off. It does not conduct heat, and therefore keeps the center of the being cut off from the passion for life.

Since glass is transparent, it implies that the seductive side and the compulsion to please people continue to function in an attempt to avoid being abandoned. 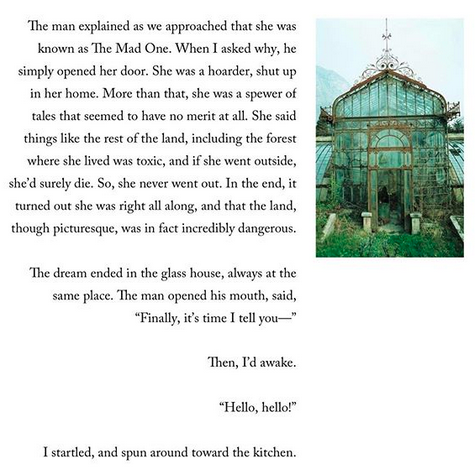 PS. Isn't it crazy how we don't always know what we're creating right away? How it shows its face slowly, over time? I find the process of creating so psychologically fascinating. If you have any similar stories, please tell me!

Much love and gratitude,
Mackenzie