On the creative process, the path less travelled, isolation, and community | An update

Whew, it's been playing on my mind for quite a while now that a blog post (not an interview, a real update) is incredibly overdue, and so here we are again, finally.

As some of you know from Instagram, I've been blogging less because of the novel, but even more so because I've taken up journaling again, which, in many ways, feels similar to the way I share here thanks to the nature of these types of blogs—unstructured and free flowing, personal, etc.

Of course, journaling is different, in that it's just you, paper, and your thoughts—free to run across the page while slowly, slowly untangling themselves until, hopefully, they become clear before your eyes. And it's for that difference that I was (and am continuing to) gravitate toward the medium, particularly now as I'm in Paris where, though I have friends, I don't have as many, and so therefore what I do have is more time to swim through my own mind, which is incidentally one of the reasons I came here— 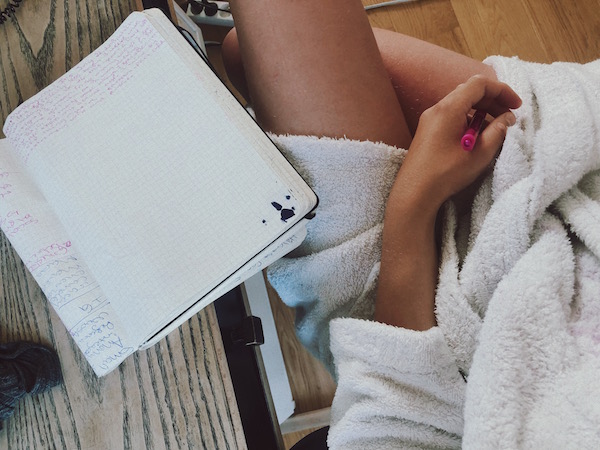 But first, blogging and why I'm back.

I started this blog and my original Instagram feed last year (the posts pre-novel) with the intent to publicly share a journey with others that isn't always shared so plainly. And that is the journey of the artist. Hence the interviews I do with others. Hence the original research and faux-interviews I did with deceased artists. Hence these blogs. Ultimately, here we are again because I don't want to stop doing that.

I will start by admitting that another reason I haven't blogged lately is I went through a period where I questioned the point and, honestly, worried as I tend to that it's incredibly self-involved to sit here sharing my life, because—as I think when I get into these headspaces—who cares?

What I've had to consciously remind myself of is that, okay, many won't, many don't. But. There are people out there who are curious about this path less travelled and don't really know what it's like, what it entails, and it's for those people that I'm sharing—not to go on and on about myself, but to serve them by way of opening a door and exposing what lies behind it.

So, here we go. I don't think I've talked too much about this before, but the thing that's springing to mind now that's important to talk about is isolation. Whether you're an artist, a solopreneur, or both as is my case, you're going to need massive chunks of time to be a alone–to comb through your thoughts, to plan where you're trying to go (to whatever degree of details suits you), and, most of all, to get your work done. The exception here would be, obviously, if your art form is a social one (filmmaking, acting, etc.) But I will say that I imagine that even if this is your medium, you probably still need a good amount of time alone, if not for the time in which you're working on your craft, then simply for the time to, as I said, to understand and map out where you're taking it all.

Maybe you're thinking, "So what? I like to be alone." That makes sense. Many gravitate toward solopreneurship, writing, painting, illustrating, etc. because of the fact that they get deep satisfaction from their craft and therefore enjoy that time alone. I'm in that boat and I believe if that's your disposition that's a really beneficial thing, because, especially for artists, you're probably underestimating the hours you need to put in totally on your own.

The thing is though, even if you really enjoy your alone time, the hours you spend with your thoughts and thereafter the creative process, there is a point, for most of us anyway, where it's like, "Okay, I need to see people. I need to get out." And when we're in that place, it's often not the case that when we go out and talk to people we want to talk about what the majority wants to discuss. We often want to talk to people with a similar, often deeper than average, thought process. And it's when we don't find those people that, ironically, we can feel even more isolated than when we're sitting at our desks or in our studios getting to work.

I bring this up because, though I feel grateful not to be in this place too often anymore, I did for the majority of my life. To be precise, I did until the spring of 2016 when, many of you know, I turned my life upside down in the name of going down a different path.

It may sound like I completely just disproved my point. I felt isolated until I took up writing? Until I went down the offbeat path? Yes, but I think I'm the exception rather than the rule. Because the thing is, at the same time as I did all of this, I was really flipping my life, actively recreating a new circle of friends. And that made all the difference. See, I honestly believe that the key to making it down a different path is having a true community around you, one that supports your "crazy" dreams, one that inspires you with theirs.

I don't want to make this the blog that never ends, but I will say that, in my story, things really changed when I began to pull these people I admired into my circle, turned to them as mentors, if not friends.

So now, to wrap it back around to isolation on the path, yes we need a lot of time in solitude to do our work, and yes I believe if you don't work well in solitude it'll be more difficult for you unless you've created a very collaborative work model for yourself. But no isolation, even during the most gruelling of work periods (say, like now for me, in Paris working to finish my manuscript for September 1st), doesn't have to be torture—not if you can still pepper your life with 2-3 people who really get it.

As for where I'm at, and why I brought this all up, I'll say quickly that I'm here because I needed to focus on my book, away from the tempting distractions that live back home in Toronto. Like I touched on, my manuscript is due in September, for editing, not publication — I wish! And as for how that's going, it's going. The isolation is working. I have about half left to edit before sending it in, and I'm on track. I made a schedule wherein I have to edit so many pages a day and it's doable, here, where the number of nights I socialize have dropped down to 2 per week, versus in Toronto where it was something like 4-6.

The way I'm able to be here for a month, in the name of full disclosure, involves my amazing friend Mélanie Rey (she's a really talented photographer, check out her work) who allowed me to house- & cat-sit for her while she's away. While I'm much more on my feet, financially speaking, than I was last post, I still greatly appreciate this month of no rent. As for how I'm supporting myself, I freelance remotely (which has gone on to pick up for me after a year and a half), and most of all, I airbnb my old place. This has been my saving grace, my greatest income stream. If you have any questions about any of this, feel free to shoot me an email. Quickly I'll add, about all this money stuff, it takes time. A lot of time. My client list has built organically for freelance, and my hours have grown organically as my clients' businesses have grown. It's a slow process. I've been financially "ill" for years, and it is only this past Spring that I've been able to stand on my own feet. To say it again, it's a slow, but steady process.

Okay, babes, this was a long one so that's it for me.

Much love until next time,
Mackenzie