Do you remember what you were thinking about this time last year? I remember amassing a ton of books — novels I'd always wanted to read, texts on the craft of writing itself, and Ryan Holidays' stack on marketing. I remember sitting there that Christmas day, beaming and thinking, "Man, 2018 is finally going to be the year where I will become what I've always wanted to be." And, you know, this isn't one of the self-admonishing posts, because the truth is this: I did. 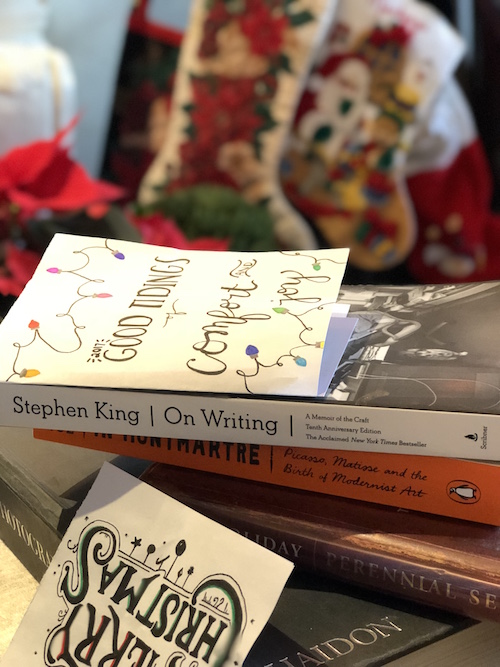 The thing is (because there is always a thing) what I'd always wanted to become — a writer — was less so about this process of reading as much as I possibly could (as I thought from January to April or so), and more so about stripping back my own layers.

Around the second week of January, I grew this insatiable thirst for knowledge. I literally remember waking up one morning asking myself, Why don't you know everything yet?

Weird, right? What that was though was, I think, insecurity bubbling up. I'd decided I was going to "do" this writer thing, and yet I hadn't a clue as to what that meant, and I thought surely all the answers I could possibly need came from the outside. Cue: reading voraciously.

Guys. I've never read so many books in my life. I read every single set of letters I could get my hands one; wrote mock interviews based on them to really embed their knowledge into my mind; re-read Mason Currey's Daily Rituals at least two more times; as well as Alice's Adventures in Wonderland. That's not all. I also listened to my favourite authors' audiobooks on repeat in order to soak up their language, all the while praying some of it would rub off on me like magic fairy dust.

I tend toward the extreme. Can you tell?

And then I joined my offline writing community where everyone was writing a book, so I thought I should, too. That is honestly how and why I began to write my novel. Ah, sometimes insecurity can be a good thing, it seems, because this was the best thing I've ever done.

See, it was in writing this novel that I realized most of what I should be writing about and how I should go about doing so (voice, style, genre, etc.) came from this well buried inside. It just needed to be uncovered before I could gain access to it.

Truth: this uncovering was way harder than reading outside material. (Surprising?) Why? Because I walk through life like so many of us do, protecting myself from pain, and for the longest time that meant shielding myself off from the world, and in doing so...myself.

For the longest time, I didn't tell people I still read Harry Potter, often. Or, finely crafted pieces really excite me. Or, I'm obsessed with candles and yoga and crystals and mythology, and that's because I'm incredibly spiritual at heart. For the longest time, I refused to address where I was blocked, personally.

And writing my novel pushed these inner truths all front and centre.

In a way, it pushed me to regress. If I were to see 5 year old me right now, we'd probably hang out quite easily now that I'm open to exploring what she likes, which is incidentally what I've always most loved.

So when I wished to be a writer, did I know I was just wishing to become myself? To write stories for the younger me? Did I know this craft would come to feel like another limb? A very important one that is striped with intuition and entrenched in this ever so deep, mystical inner wisdom?

Not consciously. But I believe I did subliminally. I believe writing is my vessel through which I will grow into the fullest bodied version of myself. And I'm so grateful. So, this is my public thanks to this craft, and to myself for having the courage to finally let it have the role it's craved in my life since I was a tiny one, writing stories in her blue and gold notebook.

(And, exhale. That was a long sentence.)

On tap for next year?

Finishing the novel, and hopefully selling it, too.
My first speaking gig - yay!
Saturday Social TO event no. 2! + further development.
More yoga.

And probably so much more, let's see!

Whew. That was A LOT about me. Relieve this introverted kid and tell me about you! What are your plans? How has your year unfolded?

I always want to hear from you, let me know :)